In this very special Saga Brief, we are joined by Graham and Ali of Rex Factor for a discussion of the Battle of Brunanburh. This decisive battle pitted the Anglo-Saxons of Mercia and Wessex against the Scots, the Welsh, and the Vikings of the Danelaw and the Hiberno-Norse. It was the largest battle to be fought on English soil up to that time. Five kings and thousands of men lost their lives that day as King Athelstan of Wessex eliminated the threat to his growing kingdom and secured Anglo-Saxon control of Northumbria. The Battle of Brunanburh served as a rallying cry to the Anglo-Saxons who sought to reassert their claim over Britain and the establishment of a new national English identity.

This episode opens with a reading of the poem found in the Anglo-Saxon Chronicle entry for the year 937.  After that, the conversation ranges from the tensions leading up to the battle, including a Welsh prophecy of victory, to the mystery of the battle’s location, the little we know of the battle itself, and then to its aftermath and legacy.

For those looking to dive deeper into the source material, we recommend Michael Livingston’s wonderful book, The Battle of Brunanburh: A Casebook, where you can read all the sources from the Welsh prophecy of the Anglo-Saxons’ defeat to the later, more imaginative histories we talk about.

You can also see what we’re up to by checking in with Saga Thing’s social media on Facebook, Twitter, and Instagram. Or send your comments to sagathingpodcast@gmail.com.

In this episode, we celebrate the life and accomplishments of the historical Rollo.  Known to many as the envious brother of the incomparable Ragnar Loðbrok in the History Channel’s Vikings.  While the historical Rollo may not have been Ragnar’s brother, Vikings gets a lot of things right.  As an exile from his homeland, Rollo earned the nickname “the Walker” by wandering throughout northern Europe raiding and conquering everything in his path.  Among his most significant conquests would come to be known as Normandy, a territory in northern France named for the Northmen led by Rollo in the late 9th or early 10th century.  Fearing further Viking aggression, the French King Charles the Simple turned over the city of Rouen over to Rollo and his men.  This simple act (get it?) provided the French with a buffer against future Viking attacks from the north.  Or so they hoped.  In this case, it worked out nicely.  Rollo and his fellow Vikings quickly rebuilt the territories they had ravaged and assimilated into French culture.  Rollo’s descendants would go on to play a very significant role in European history.  As the great-great-great-grandfather of William the Conqueror, Rollo’s blood flows through many veins of later European royalty.
Download this episode (right click and save)

If you’re interested in learning more about that part of the story, we recommend the following episodes of Rex Factor, our very favorite podcast:

Looking for more Vikings and Saga Thing cross-over?  We’ve got a few episodes that might interest you:

The Saga of Ragnar Loðbrok and His Sons – where we review the medieval stories behind the Vikings hero.

The Blood Eagle – where we discuss the Viking practice of splitting a man open and its historical veracity.

And if that’s not enough for you, then it’s time to hit the books.  Here’s our select bibliography for the episode.

In this epic multi-part episode, we tell the story of Iceland’s most famous and longest surviving outlaw, Grettir Asmundarson.  Join us as we trace his life, from its tempestuous beginning to its tragic end.  Before we delve into his amazing exploits as an adult, we must look back to his origins. In traditional saga fashion, we begin with his great grandfather, Onund Treefoot.  We follow Onund’s efforts to resist the increasing power of King Harald Fairhair and his struggles to come to terms with the loss of his property and his leg.  Forced to redefine his own identity and to make a new life in foreign lands, he emerges as the truest hero in the saga, renowned as “the bravest and most agile of all the one-legged men in Iceland.”  From Onund, we wend our way through battles over whale corpses, murder, and legal cases in the genealogy until we arrive at Grettir himself.  We’ll look briefly at Grettir’s inglorious youth, his troubled relationship with his father, Asmund, and the events leading up to his first outlawry.  Will Grettir learn to control his temper and put his strength to good use? Or will he flout the norms of society and continue to make his own way more difficult?  Find out as Saga Thing takes on Grettir’s Saga (chapters 1-20).

Pick up a copy of Grettir’s Saga and discover all the stuff we left out! Go to vikingnorse.com for more information about Jesse Byock’s Viking Language series, or just click the links below the images to purchase a copy through Amazon.

Click Krakumal Translations to read a .pdf of the verses covered in this episode.

If you’d like to have your very own copy of Krákumál, pick up a copy of Ben Waggoner’s The Sagas of Ragnar Lodbrok

And to prove the poem’s lasting popularity, check out this performance of Peder Syv’s (1631-1702) adaptation of the 12th century Krákumál from Velbastað on the Faroe Islands in 1959 (at least that’s what the tag on the YouTube video says).  Now that’s an impressive journey through the ages.

In our first ever Saga Brief, we explore the legendary Viking torture ritual known as the blood-eagle.  It’s a brilliantly violent practice with a complicated, but fascinating textual history.  In short, it’s perfect for the boys of Saga Thing.

Whether the blood-eagle is a historical method of ritual torture and execution or merely a literary motif designed to thrill and frighten, this is some pretty horrific stuff. Dig in!

Plus, we dive into a passage from a modern “what-if” fantasy/history novel with a cover straight from the glory days of SF cover art: 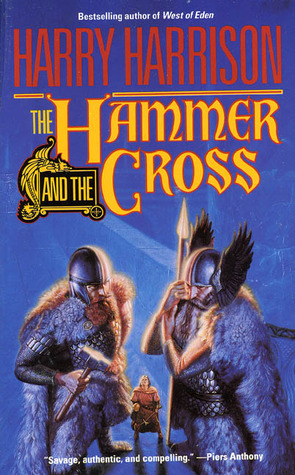 And, if you don’t mind a bit of violent play acting, have a look at this re-enactment to wet your whistle.